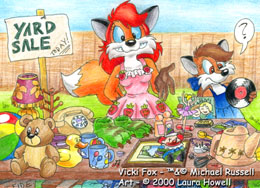 We often get asked the same questions from fans and friends. Many of these common questions and their answers are collected on this page. If you do not find the answer to your question or curiosity, please ask on one of the discussion areas, such as Vicki's Facebook page.

There are some questions we cannot answer, such as details about future comic strips and stories.

Who is Vicki Fox and the rest of the cast?

More details can be found on the Meet Vicki and Cast pages.

Who are the creators behind Vicki Fox?

The primary creators of Vicki Fox are Michael Russell and Laura Howell. Several other people have contributed to bringing the cartoon cast to their current form. More details about the creative team can be found on the Artists page.

Why do the strips have titles?

Sometimes, the title adds to the story joke. Mostly, the title is for identifying the strip in the strip archive. A descriptive title is friendlier than the boring sequence number.

Is there a chance for a Vicki Fox cartoon?

If you know a studio and have a lot of money to fund the project, let me know!

Where is Vicki's World?

Vicki's World exists in a small, north Georgia, USA, college town, called Apopka. This town is located about 70 miles north of Atlanta. Vicki's town borrows its name from Apopka, Florida, and its characteristics from Dahlonega, Georgia.

What categories of characters exist?

The original character model included a human character, Geoff. This character is no longer an active member of the cast. After the third story, we decided to concentrate on the humanized mammals (anthro animals, cartoon animals).

Even though the stories minimize reference to the humans in Vicki's World, the settings, furnishings, and other props continue to reflect their human origins. One way this is evident is sizing. The humanized mammals are the size of their real animal counterparts, just standing upright. For example, Vicki is short; she is only 3.5 feet tall.

Why do you wear clothes? Isn't fur enough?

Civilized people and animals where clothes. Clothes are more than just a form of modesty. Clothes provide protection, they show status, they are functional. And, as Meredith will tell you, they are just so cute and enhance her figure. Also, clothing is a great prop that helps tell a story. I mean, if you see Vicki wearing a cute skirt and vest, you know she is doing something casual. However, if you see her wearing her business suit, you know she's on an assignment.

The basic rule is that dating/mating relationships can only exist between members of the same animal family (higher level than species). So, a canine can date another canine. So, a fox can date a wolf. However, a canine cannot date and would have no romantic interest in a feline.

How can some characters be religious?

Can we create fan artwork?

Wow, that is wonderful that you like the characters enough to illustrate them!

The following are some guidelines we hope you will follow in your fan artwork.

Can I link to the web site?

Please, when possible, link to the main page. The subpages may change.

Please, do not embed images from Vicki's site on your page.

Can I copy pictures from the site to use with the links?

Please, do not copy pictures! Some of the pictures on this web site are not fully owned by Vicki Fox Productions Inc; they are jointly owned or used with permission from the owner. As a result, it is not safe to assume any of the pictures are freely usable.

We provide the following link icon and banner for your use.

Can I repost pictures from the site?

You must ask permission to repost a picture. If permission is granted, you must include the specific references and credits with the picture.

Can I use any of the Vicki Fox characters in my stories or artwork?

This is a tricky subject.

We appreciate that you like Vicki Fox and characters enough that you want to use us in your project.

But, we have to ask, if you are seeking to be creative, doesn't it make more sense to use your own characters? In that way, you have total control and you don't have to worry about misusing me and my friends. I know my creators are very jealous and protective about how we are used and depicted.

We prefer that you do not use Vicki Fox or the cast in fan fictions. Our main objection with fan fictions is that often they put the cast into inappropriate situations. Vicki is a small town country girl from the South. It makes no sense for her to appear in stories that involve aliens, ancient Japanese battles, or whatever. Unless your characters fit into a small Southern college town setting which mixes humans, cartoony mammals, and regular animals, then it doesn't make sense for them to appear with Vicki, either.

Finally, there are copyright and trademark issues. That means only Michael Russell and Laura Howell can sell anything (written, painted, CG, whatever) with depictions of Vicki Fox or the cast.

Do you use ideas submitted by fans?

Just like most syndicated comic strip artists, we purposefully do not use unsolicited ideas and suggestions. There are many copyright and intellectual property issues involved. As a result, we generally do not read unsolicited materiel.

However, we love to hear what fans say about the comic strips and other products that we have released. We use your feedback.

Can I republish the strip on my web site?

However, we hope you will put a link on your site to the comic strip.

Is there a RSS feed?

Not at this time. This is a planned, future update.

How can I learn about updates?

Can I get a Vicki Fox T-shirt?

Yes, and other products, too. We have a Cafe Press store featuring Vicki Fox logo products. If there are other Cafe Press product types you would like, please let us know.

Is the comic strip published on paper?

No. It is only available on this web site.

No. The comic strip is digitially produced.

What is with the trademark symbol?

The name Vicki Fox and the sitting logo picture are used as the brand identity for a line of products. These products include paper products, such as artwork and greeting cards, and clothing. As a result, the name and logo picture are unregistered, in use trademarks to promote and brand commercial products and services.

The trademark is owned by Vicki Fox Productions Inc. The company is considering future registration of the trademark.

What is Vicki Fox Productions Inc?

More details about the company can be found on the Company Services page.