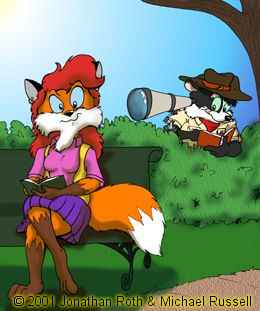 Howdy! I'm Vicki Fox, your host and the star of this web site. I'm glad you have visited.

I am often asked about where I came from and who I am. On this page, I will tell you a little about my history. More details also appear on the Character Cast page.

I was born on 24 March 1996, as the collaboration between Michael (Mike) Russell and KeV Beeley.

KeV was doing some sketches and created the prototype of a cartoon fox character. He wasn't sure what to do with the character; but this was my humble beginning.

Mike, who likes foxes, thought there was potential for me and encouraged KeV to think about using me for some stories. Mike, also came up with my name (more on that later). So, KeV and Mike started working on the concepts and design for me. Thus, I was born.

In early 1997, Mike asked Laura Howell to work on my design. Laura is a good friend of KeV and Mike. KeV had other projects he was interested in and so Laura took over as my artist, bringing me to life.

Mike wanted me to be a cartoon fox. A fox with a future in animation. Yay. (If any of you visitors to my web site have a lot of money and want to fund making me a cartoon star, please talk to Mike. *hee hee*)

Mike can't draw, but he is sort of ok with editing images. So, he used several cartoon drawings and many other influences and proceeded to draw my first official picture. Many of my features were resolved in this picture: my fondness for purple with yellow accent, my dark red hair that goes to mid back, the gold ring just in my left ear, and my blue eyes. I sort of look like a cat in this picture *snicker*. Well, I told you Mike can't draw.

With this prototype, Mike started asking folks who can draw to help my appearance. The first being, Robert and Margaret Carspecken, well known for their OzFoxes characters.

I am named after a real fox. In the book, Wild Fox, a true story by Cherie Mason, the author shares how a wounded adult fox came into her life one year and how she helped nurse it back to better health. Even though the fox was a dog fox (male), she named it, Vicky. This feminine name suggests the beautiful grace and delicate build of all foxes. Mike liked the story; and I think he likes the name Vicki, anyway. This is the basis of my name.

Mike changed the spelling from Vicky to Vicki because the "i" variant is less common.

You may notice there are different representations of me on these pages.

The official model for me and my cast are defined by Laura Howell.

However, Mike thought it would be fun to commission portraits of me from various artists. These images would reflect the style of the artist, yet show me.