Vicki is a fun, cheerful, optimistic young lady who is as smart as she is cute. She is conservative and modest in attitude and behavior. She loves helping others and assists in the youth ministry at her church. Vicki graduated from Tettenhall College with a degree in computer science. But, she decided to stay with her friends Aussie and Ceri and took the reporter job at the local magazine.

Role. The star of the stories. Plays an active part in all stories. She will often be involved in jokes, but rarely is the target of jokes.

Height: 42 inches (107 cm). Vicki is about the size of a large red fox standing on its hind legs.

Distinctions: Vicki wears a single ear ring in her left ear. She always wears something purple in colour.

Origin: Vicki was born in Florida. She currently lives in Apopka, Georgia; a small town near the Tennessee border. Her heritage is Midwestern and Southern. Her ancestors are mostly from Scotland (can't you tell by her lovely red hair?)

Accent: She has a mixture of Midwestern and Southern dialects. If you are familiar with Country Music stars, you would think she sounds like a cross between Leann Rimes and Allison Krauss.

Job: She is the science reporter at the Apopka Reporter.

Hobbies: Vicki is athletic and likes to play sports. Her favorite sport is tennis. She likes hanging out at the beach, actually the local lake resort. However, she hates getting sand in her fur. She was a cheerleader in High School and at College. This is where she met Meredith. She loves chocolate (but, is that a hobby?). She listens to all types of music; but Bluegrass, Celtic, and Asian-pop tend to be her favorites.

Size: Vicki's height is four heads in proportion. She is a cartoon fox.

Proportion: Her eyes and snout are about the same length.

Hair: (a) Her hair looks complex, but it isn't when you look closely.
(b) There is hair in front of her ears, so it looks like her ears are sticking out of her hairstyle.
(c) Vicki's hair is full and thick and quite wavey. Thick of a country singer. On occassions, like when playing sports, she may pull her hair into a pony tail.
(d) From face on, Vicki's hair fringe is stylized. The peak has to face either to the left or right, depending on perspective. It mostly is parted to lean toward Vicki's left ear.

Earring: She only wears one earring and that ring is in her left ear.

Eyebrows: Vicki's eyebrows float in front of her face and hair, unless she's facing a direction that would make it look silly. Vicki has thin eyebrows. Basically just a single line.

Eyes: The eye whites are a light, pastel blue. She has no iris, just a solid black pupil. However, often a white glimmer is shown. Vicki's eyes intrude into her cheek fur just a small amount.

Snout: The snout is relatively square, with a cleft.

Cheeks: Her side cheeks have four points; enough for her fur to look full, but not too bushy.

Teeth: It makes her look foxy to have a suggestion of pointed teeth when her mouth is open, but USE SPARINGLY -- don't make her look like a vampire.

Belly white: Vicki has a white front. Think of the light colour front/belly design common of Warner Bros characters. The white fur DOES NOT extend onto inner arms or inner thigh.

Hands and feet: Her hands and feet are quite solid in shape and construction (more like Ceri's than Meredith's); but they are not described as big.

Tail: (a) On her tail, use long and short spikes to form the division between tail and tail tip. the tail tip is small, about 1/4-th or less of the tail length. The tail length is about the same as her leg length.
(b) Vicki is proud of her tail. She does not hide it under clothing, so her tail comes through a properly designed hole in the back of the skirt, dress, pants, whatever.

Clothed: Vicki is always shown clothed. She prefers comfortable, modest, and conservative outfits and also likes to be fashionable.

Skirt: Draw in each pleat starting at the bottom hem and continuing 3/4-th of the way up to the waist. Keep in mind, Vicki wears a bouncy, pleated skirt. It is not a tennis skirt or similar knife pleated skirt, the pleats reflect the fullness and bounce.

Purple: Vicki ALWAYS wears something with the colour purple or violet. All of the characters have an associated colour and Vicki's colour is purple. This can be the major colour of her outfit or it can be something as simple as a scarf, a wrist band. The important thing is that she have at least one article of clothing or accessory that is purple (or violet) in colour. 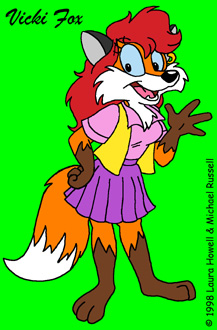 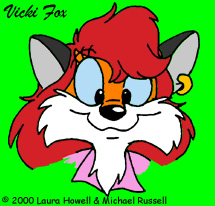 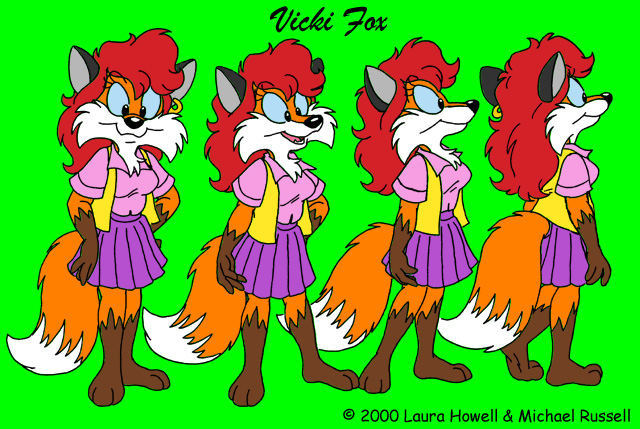