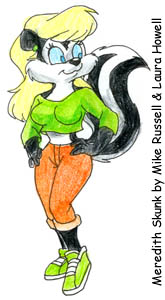 Meredith is like Elle in the movie Legally Blonde. That is, she appears to be a ditzy blonde who is superficial. But, when she gets serious about something, she demonstrates her intelligence, wisdom, and wit.

Role. Meredith provides a non serious character who provides more of the emotional responses in the stories. She is superficial, but not shallow. She also provides a character for romantic stories involving her boyfriend, Aussie.

Distinctions: Meredith likes to dress to show off her figure. She knows she is pretty and loves to tease the boys.

Origin: Meredith was born in Burbank, California. Her parents sent her to Tettenhall College to get her away from California and experience 'the rest of the world'. It took her a little while to get used to living in a small town, but her fun attitude helped her quickly adjust.

Job: College student. Meredith is in the business accounting program at the College.

Hobbies: Clothes! Flirting. Working out at the gym. She jokes, "Like, with the slow metabolism we skunks have, I have to work to look like this!"

Size: Meredith's height is four heads in proportion. She is a cartoon skunk. She is shorter than Vicki.

Tail: The underside of her tail is white.

Legs: Her legs, especially between knee and foot, are quite long.

Waist: She has a slim waist.

Chest: She has a large chest. Where most of the girls in the cast have about a B-cup size, Meredith is D-cup or bigger.

General: In general, Meredith is curvy.

Hair: Her hair is a light lemon yellow, sort of like Minerva Mink's. Her hair style is fluffy. The centre of her hair is behind the ear in 3/4-th view.

EARS: The bottom of her ears are about level with the top of her eyes.

Snout: Her snout is small, with a small cleft in the centre, sort of like that found on Amy the Squirrel.

Cheeks: The from the back view shows how her cheeks fit on her head when her hair is tied back.

Back stripe: The from the back view shows the twin white stripe on the tail continues up the back and then joins just below the neck.

Tail stripe: The from the back view shows the twin white stripe on the tail joins at the tip of the tail. Thus the center black stripe ends before the tail tip. Her tail stripe is different than Aussie's.

Eyes: Her pupils are a dark blue, not black. Her eye whites are a light pastel blue, lighter than Vicki's. Her eyes are not exactly round, but they are less oval in shape than Vicki's. They don't have to have the shape of the cheek visible beneath, but it does make her look more cute.

Eyebrow: You can insert an eyebrow shape within the white surrounding the eye if the expression demands it. In general, there is no eyebrow shown.

Eyelashes: She has three eyelashes per eye.

Emerald green: Meredith ALWAYS wears something with the colour emerald green or green. All of the characters have an associated colour and Meredith's colour is emerald green. This can be the major colour of her outfit or it can be something as simple as a scarf, a wrist band. The important thing is that she have at least one article of clothing or accessory that is emerald green in colour.

Belly white: Meredith has a white front. Think of the light colour front/belly design common of Warner Bros characters. The white fur DOES NOT extend onto inner arms or inner thigh.

Clothed: Meredith is always shown clothed. She prefers short outfits; somewhat sexy, but not revealing outfits; whatever is typically seen on college campus (since she is a college student). Of the case, Meredith is the one to wear a skimpy bikini swimsuit. Meredith is also the only character who does not have a standard outfit. Basically, have fun creating clothing designs for this Valley Girl skunkette.

Clothing: She likes the off-the-shoulders look with short skirts or shorts.

Accessories: She likes to accessorise. Things like wrist bands and jewlery.

White border: In general, Meredith's black colour is really a dark grey. It may not be necessary to add a white border or accent. See the face picture to the left. A white border was added to her ear and to her shoulder to help 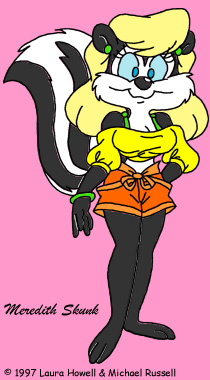 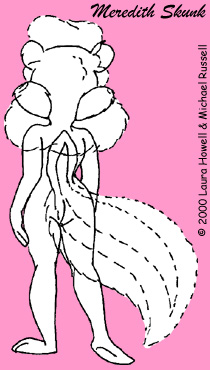 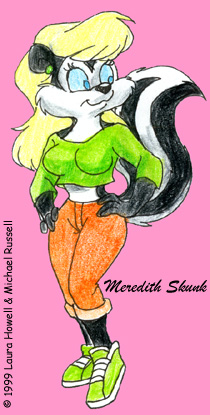 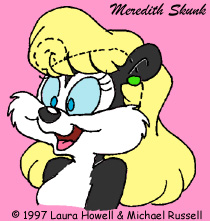 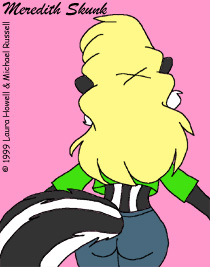 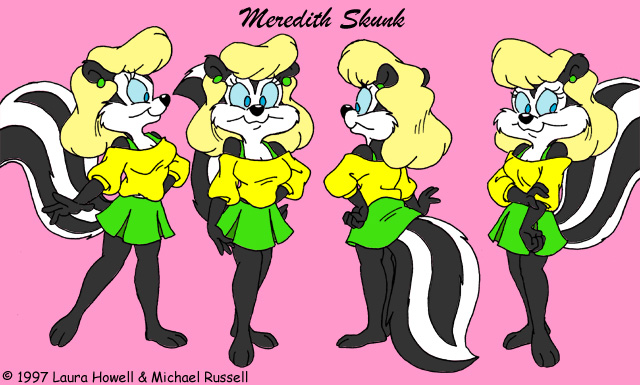